Canadian Pacific Railway Ltd. agreed to buy Kansas City Southern for US$25 billion, seeking to create a 20,000-mile rail network linking the U.S., Mexico and Canada in the first year of those nations’ new trade alliance.The transaction creates the only network that cuts through all three North American countries, giving CP access to the Kansas City, Missouri-based company’s sprawling Midwestern rail network that connects farms in Kansas and Missouri to ports along the Gulf of Mexico. The network would also let CP reach deep into Mexico, which made up almost half of Kansas City Southern’s revenue last year.“I’ve had my eye on the KCS for quite some time,” CP Chief Executive Officer Keith Creel said in a telephone interview. “We extend our reach for our customers through the U.S. and into Mexico, and at the same time KCS can do the same coming from Mexico up to U.S. destinations and Canada.”READ MORE: CP Rail's CEO makes the US$25B deal his mentor wouldn'tThe combination -- the biggest purchase of a U.S. asset by a Canadian company since 2016 -- would provide a transportation solution for manufacturers seeking to bring factories back to North America after the pandemic exposed risks of relying on overseas supply chains, Creel said. The merger has a “compelling and powerful environmental impact” by enticing more truck cargo to rail, which is about four times more fuel efficient, he said. 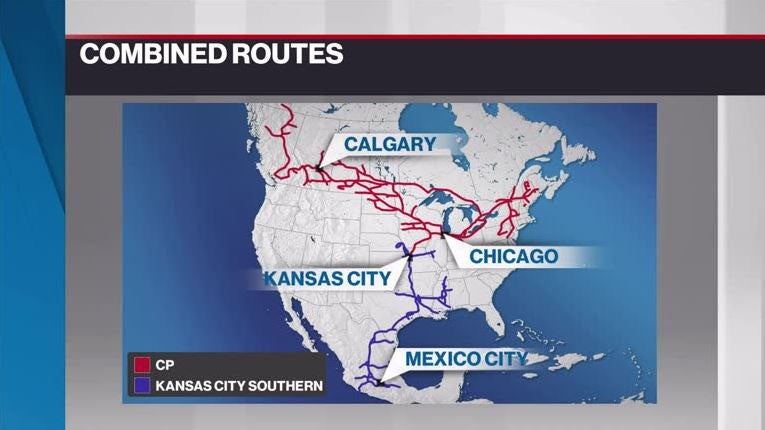 Kansas City investors will receive 0.489 of a CP share and US$90 in cash for each share they hold, valuing the stock at US$275 apiece -- 23 percent more than Friday’s record close, according to a statement from both companies on Sunday.
Creel will be CEO of the new company, to be based in Calgary, and is expected to remain at the helm until at least early 2026, according to a separate statement. The new entity, to be called Canadian Pacific Kansas City, or CPKC, will have revenue of about US$8.7 billion and almost 20,000 employees. Trade PlayThe transaction would be the biggest Canadian purchase of a U.S. asset since Enbridge agreed to buy Spectra Energy for about US$28 billion five years ago, according to data compiled by Bloomberg. That deal closed in early 2017. The deal comes as trade across the three nations is expected to pick up under the Biden administration. Just days after his inauguration, U.S. President Joe Biden spoke with the leaders of Canada and Mexico, his first calls with foreign counterparts, where issues from trade to climate change were discussed. Mexico is a crucial supplier of vehicles, auto parts, electronics and food and a major customer of grain, fuel and consumer goods -- ties that are likely to be strengthened by July’s passage of the U.S.-Mexico-Canada trade pact. Kansas City’s unique network linking Mexico’s largest industrial cities and ports to the U.S. Midwest would be positioned to benefit if the coronavirus pandemic and fraying ties between the U.S. and China prompt companies to move lower-wage manufacturing from Asia to North America. As part of the transaction, CP will issue 44.5 million new shares, to be financed with cash-on-hand and about US$8.6 billion in debt. CP’s debt would jump to about US$20 billion and leverage would increase to about four times earnings before interest, taxes, depreciation and amortization. Free cash flow of about US$7 billion over a three-year period from the combined railroad would help CP whittle that down to 2.5 times.CP expects to boost adjusted diluted EPS in the first full year after completing the deal, and later generate double-digit accretion. The combination will result in about US$780 million of efficiency gains over three years, with about three-fourths of that coming from profit increase.No Job CutsThere will be no workforce reductions, Creel said in the interview, and he predicted the merger will result in job gains as sales grow.CP will file the merger application with the U.S. Surface and Transportation Board on Monday and begin the process of creating a trust that will hold Kansas City Southern’s shares while approval is pending, Creel said. The companies expect a review by the STB to be completed by mid-2022On a conference call with analysts Sunday, Creel said there’s “minimal risk’’ that regulators will block the deal. There are no situations in which the merger will cause shippers to lose access to rail options, he said.“The Canadian Pacific-KC Southern combination has most of the hallmarks for regulatory approval,” said Lee Klaskow, analyst at Bloomberg Intelligence. “It will remain the smallest Class I railroad and the lack of overlap and the extension of the combined networks will not impede competition, in our view, and may result in improved fluidity.” He added that Kansas City Southern is exempt from the regulator’s “high-hurdle merger rules.”Still, there could be other obstacles. CP’s hostile attempt to acquire Norfolk Southern Corp. beginning in 2015 collapsed amid a hail of shipper criticism, including from United Parcel Service Inc., FedEx Corp. and even the U.S. Army, which uses the rails to transport military equipment. Creel called the deal “simple and pro-competition” because the two networks don’t overlap.“It provides a positive impact for all stakeholders, including the public interest,” Creel said. “Existing customers get to extend their length of haul and reach into new markets, as well as new customers that this network will naturally attract.”A Repeat TargetKansas City Southern, the smallest of the U.S.’s Class I freight railroads, has been a takeover target before. In September, Dow Jones reported that the company rejected a US$20 billion offer from Blackstone Group Inc. and Global Infrastructure Partners. Rumors of Kansas City Southern as a takeover target have swirled for years, especially after Canadian National Railway completed the purchase of the Illinois Central Railroad in 1999 that gave it access to ports in the U.S. Gulf of Mexico. Patrick Ottensmeyer, president and chief executive officer of Kansas City Southern, listens during the Latin American Cities Conference in Mexico City, Mexico, on Tuesday, May 23, 2017. The Latin American Cities Conference "Mexico and NorthCreel and Kansas City Southern CEO Pat Ottensmeyer said they began talks on the merger late last year. The two companies, which has work together for years with railcar exchanges, decided the timing was right, especially after the revamped U.S.- Mexico-Canada trade deal that replaced NAFTA, Ottensmeyer said.“This is a combination that just makes tremendous sense given that lack of overlap and the opportunities such as USMCA present for the outlook for rail and the footprint that this company is going to have in terms of an unmatched North American network,” Ottensmeyer said in the telephone interview.BMO Capital Markets and Goldman Sachs are financial advisers for Canadian Pacific, while Bank of America and Morgan Stanley are advising Kansas City Southern.--With assistance from Carla Canivete and Matthew Monks. Courtesy of BNN Bloomberg